The Ballard community in Seattle has lots of different condo styles. From modern construction with the latest bells and whistles to funky older buildings that Don Draper would feel right at home in, and from large units with expansive views of the Puget Sound to small condos on busy roads.

But one thing they all have in common is that they ALL pay monthly Home Owner Association (HOA) dues.

Compared to buying a house, when buying a Ballard condo, or any condo for that matter, you need to do some additional research. Here's a post I previously wrote on The 9 Critical Questions to Ask When Buying a Condo. It's too late to ask after you've closed on the home!

And one of those questions is: "How much are the HOA dues and what do they cover?"

As you will see below, there's a lot of variation in what you might pay from one condo development to another. When looking at condos for sale in Ballard Seattle and calculating your potential monthly mortgage payments make sure to allow for HOA dues.

Here are some numbers on HOA dues for Ballard Seattle condos.

I looked at HOA dues for condos that were either currently for sale, pending, or had sold over the past 2 months in the Ballard neighborhood as of the first week of October 2018. I looked at dues for both 1-bedroom and 2-bedroom condos.

For each, I calculated the average monthly HOA dues and the range (low and high). All data were obtained from the NWMLS. There were 28 one-bedroom and 24 two-bedroom units.

So, on average, you can expect to pay an additional $120/month in dues for a 2-bedroom versus a one-bedroom.

However, when you look at a specific condo development, you might see a larger difference between the dues for 1-bedroom and 2-bedroom units. For example, for Canal Station condominiums on Leary Avenue, for a 1-bedroom unit you can expect to pay about $290 in dues but for a 2-bedroom unit pay closer to $600/month, a 2-fold difference.

Also, as you can see, there is a wide variety in how much you might end up paying. For 2-bedroom units, it ranges from a low of $200 all the way up to a whopping $994! You're probably wondering where that $994 is from... that's Sunset West Condominiums on Shilshole Avenue.

Why such a large variation you ask?

Well, it depends on what stuff is included in your dues and also on the overall financial health of the Home Owners Association.

At a minimum, the following are always included in HOA dues:

At the "all included" end of the spectrum you might get the following:

You will always have to pay your own electrical bills.

The total monthly HOA dues you pay will also be affected by the overall financial health of the Home Owners Association and how much cash reserves they have in place to meet upcoming planned (and unplanned) maintenance and upgrades.

If the HOA coffers and running low, then you can expect the HOA dues to be higher than you might pay for a comparable condo run by a more financially stable condo development. The former needs to build their reserves back up and so need to increase HOA dues.

Regardless, just like taxes, HOA dues will go up over time. Also, just because a condominium you are interested in has low HOA dues does not automatically mean that it's a good thing.

Click here to search ALL condos currently for sale in Ballard, Seattle.

How competitive is Ballard in Seattle for single Family homes and condos? In the current strong sellers' real estate market, ... 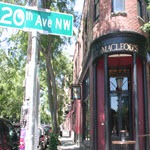 Properties for sale in Ballard Seattle are a popular option with many home buyers. Ballard is a great, self-contained ...